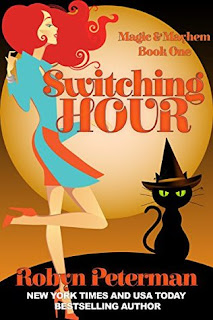 Switching Hour by Robyn Peterman
Reviewed by Storm
Get it here:
Amazon:
http://www.amazon.com/gp/product/B014K1BR4C?keywords=switching%20hour%20robyn%20peterman&qid=1444660147&ref_=sr_1_1&s=digital-text&sr=1-1
B&N:
http://www.barnesandnoble.com/w/switching-hour-robyn-peterman/1122584769?ean=2940152325836
Blurb:
Released from the magic pokey and paroled with limited power is enough to make any witch grumpy. However, if you throw in a recently resurrected cat, a lime-green Kia and a sexy egotistical werewolf, it's enough to make a gal fly off the edge.
Not to mention a mission...with no freaking directions.
So here I sit in Asscrack, West Virginia trying to figure out how to complete my mysterious mission before All Hallows Eve when I’ll get turned into a mortal. The animals in the area are convinced I'm the Shifter Whisperer (whatever the hell that is) and the hotter-than- asphalt-in-August werewolf thinks I'm his mate. Now apparently I'm slated to save a bunch of hairy freaks of nature?
If they think I'm the right witch for the job, they've swallowed some bad brew
Review:
This was the first book I have ever read by Robyn Peterman and boy was it every FUNNY! I haven't laughed so much throughout a PNR book I think ever. While it was super funny, it was also a really good story with great characters. I know that I will surely be looking for more books by this author and will be recommending her books to those who like a good laugh along with their PNR. 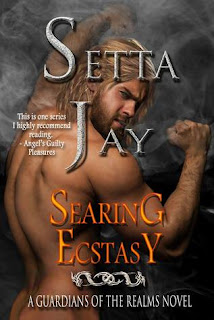 Drake, the powerful dragon and leader of the Guardians, has spent his long life protecting all inhabitants of the four Realms, but fails to save the one who matters most. His mate. In the month since finding her feral, he’s been slowly losing control of his beast and soon he fears the dragon will reign free unleashing it’s fury upon the Realms.

Delia has changed. No longer a carefree young woman, she is now a nightmare in the making. After her abduction and torture she unwillingly houses two beasts and more power than she can ever contain on her own. She can never be released. Nor can she have the male who gives her any semblance of sanity in her new world, the one she craves more than her own freedom.

With unknown enemies on the horizon and yet another God awakened will they lose themselves in the madness of an impossible mating? Or will they come together in searing ecstasy, bonding them in a way that sets them both free?

Warning: Sexually explicit content (beds actually get burned down) and alpha males and females with bad language.
Review:
This is yet another blow your clothes off hot and sexy book by Setta Jay. I think out of all of the books in the series, this may be one of the best yet. We are continuing to find out more and more about these characters and where they come from, all while developing deeper connections to the characters. While this is a VERY sexual book, the story is very good. The sex doesn't overshadow the story at all, which can be hard to accomplish in a erotic story such as this. I do still compare this to the BDB and yet in many ways, I am liking this series maybe even a bit better. I will definitely be waiting anxiously for the next book to come out!
5 out of 5 Fangs
<3 Storm
﻿
Posted by Unknown at 7:17 AM No comments: