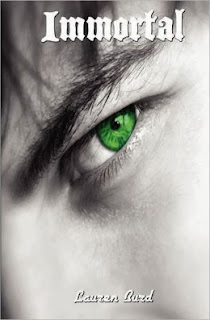 
Blurb: The wound inflicted only a few minutes before was nearly healed. A small cut was the only sign that anything had occurred. I watched in disbelief as it finished closing and eventually disappeared.  "What are you?"

Gods, demons, vampires, eighteen year old Alina Taylor doesn't believe in any of them, until she meets Samuel Grant and Duncan Michaels, and discovers a world that could destroy everything she loves.


**Review**:  *SPOILERS*  This had an interesting summary which got me excited to read the book, but ended up being slightly disappointing. There are so many similarities to Twilight that I had a hard time getting through it.  She meets a hot guy that all the girls flock to but is standoffish with her, they share a class together and sit next to each other where she shies away from him, he saves her from a car, he whisks her away when a "hunter" goes after her etc. etc.  Halfway through the book it switches gears a bit and gets better but ends on a cliffhanger that drives you nuts.  All in all, the editing wasn't terrible and it left me wanting to read the next one so I think it's worth a read!