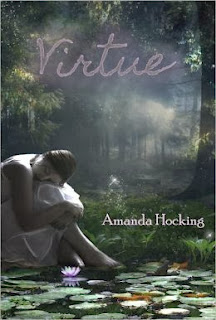 
Blurb:   In a world filled with magic, love might be the final answer in the eternal battle between good and evil. When Lux is tasked with retrieving the virtuous Lily for his master, his entire world is put in jeopardy. Lux must battle goblins, demon dogs, and sea dragons to rescue the one he loves, and that's only the beginning of what he must face...


Review:   Many have said this is supposed to be Amanda Hocking's best work yet, and as a fan of her YA books, I would disagree. I did enjoy reading it, but it seriously only took me a little shy of two hours to finish it all. While the storyline was good and creative, it was also incredibly rushed and I felt as though the book itself was juvenile. I did, however, love her Snow White references and details, it gave it a little something extra. I think one of the biggest problems is that there is a disconnect with the characters, you don't really get attached to any of them like in the rest of her books.  Despite all the issues I had with this one, I do suggest giving it a read!