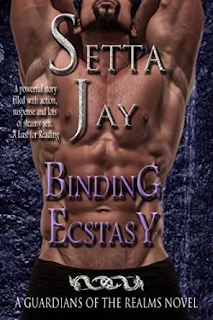 Blurb:
Natasha and her sister were created with sinister purpose. They were Apollo's most deadly and potent weapons. After finally escaping the evil God long ago, they made a secret life concealed among humanity in Earth Realm. There, Tasha has spent her nights watching the mortals at her club engage in erotic scenes that leave her aching… desperately longing for someone with the power to dominate her, to provide the pleasure she craves. For her own safety she knows she’s destined to live her life in the shadows, but when she sees a male who sparks an insatiable hunger she is unable to remain hidden.

Bastian and his fellow Guardians have spent the last month in a fruitless search for Apollo. They know that something dangerous is on the horizon and it is imperative they lock away the corrupt God immediately. After recently witnessing a number of his brethren find their fated mates, Bastian never considered that he would also be blessed. But when the calm and controlled Guardian sees his alluring and seductive female he learns just how wild and consuming the mating frenzy can be. However, his mate is incredibly powerful and at risk of being caged by his own brothers if he doesn’t do everything, including lie, to protect her.

It's a battle that both will win if they can survive the deadly forces, both friend and foe, that surround them.

Warning: This novel is intended for a mature audience. You will find kick-ass females, explicit sex, voyeurism and alpha males with bad language
Review:
Bastian and Natasha's story I feel was one of the best that this author has written. Yes there was A LOT of sex but I felt like there was more to the story as a whole than previous books. I have really enjoyed previous works, but you can tell that the author seems to be coming into her own and feeling more comfortable with writing these books. I have compared them to the Black Dagger Brotherhood in the past, but I feel that while it still has that same vibe, she has managed to make it entirely her own. The Guardians are a world all their own and I can't wait to see what she has in store for them in future writings.