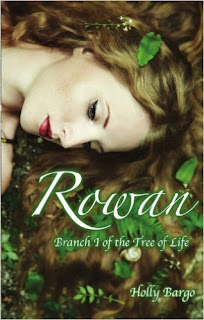 Rowan: Branch 1 of the Tree of Life By Holly Bargo
Reviewed by Storm
Get it here:
Amazon:
http://www.amazon.com/Rowan-Branch-1-Tree-Life-ebook/dp/B00INFQXC8/ref=sr_1_1?s=digital-text&ie=UTF8&qid=1436544062&sr=1-1&keywords=Rowan%3A+branch+1+of+the+tree+of+life
B&N:
http://www.barnesandnoble.com/w/rowan-ms-holly-bargo/1118770381?ean=9781496056573
Blurb:
Nearly a century ago, Rowan Nemed died by lightning strike. The divine bolt ignited something magic and she was transformed into something rare, powerful, and fey: sidhe.

Sidhe survival depends much upon one’s ability to remain hidden from other supernatural creatures and magic users who would exploit them. Rowan has lived for several years in the pressure cooker of Hollywood as a set designer, carefully staying away from the camera. However, a spontaneous act of recognition for her work brings Rowan to the notice of Los Angeles’ supernatural community and her freedom is threatened.

Lion shifter Adrian and vampire Simon are best friends and business partners. When they discover Rowan, each wants her for his own. Rowan does her best to dissuade them, for a supernatural matebond means the end of her freedom.

Then demons begin hunting sidhe and Rowan is a prime target. She agrees to exchange her freedom for survival. But which male will Rowan accept? And can she survive when one of them dies in a battle to keep her?

This is the first of three books in The Tree of Life trilogy. The book can be read as a stand-alone novel.
Review:
This book was a really good read. I enjoyed most of the characters and there were quite a few plot twists and turns which always kept you guessing. Overall a enjoyable read and I will look forward to reading what this author has in store for future books.
4 out of 5 fangs
~Storm﻿
Posted by Unknown at 9:06 AM